I love October. The fall season finally arrives in Mississippi, the PGA Tour comes to Jackson and most importantly, baseball fans around the world get to celebrate two weeks of the great Fall Classic (World Series if you are not a baseball fan… and this year was a great one). Unfortunately, this October has been dominated by financial market chaos. What is going on?

One of my favorite analogies for explaining economic cycles is the great game of baseball (give me a break, it’s October!). In a baseball game, fans and players remain pretty relaxed during the early innings of a game. Pitchers will remain in the game for several innings at a time, you rarely see a pinch hitter and you almost never see a pinch runner. However, fast forward to the 7th-9th inning, it is not rare to see a coach call-up a different relief pitcher nearly every batter. Pinch hitters and pinch runners are used virtually every inning. Why? Because when the game is on the line, you must use every tool you have to give your team the best chance at success.

The same concept applies to the economy. There is a great deal on the line when we reach the late-cycle. In the last year alone, we have seen major tax reform, the unwinding of the Federal Reserve’s (Fed’s) balance sheet and the highly debated timing of interest rate hikes. Every decision that is made by politicians, corporations, and large investors is scrutinized - creating uncertainly and volatility in the markets. For example, if the Fed moves too soon or too far with interest rate hikes, they could kill economic growth 6-24 months early. If the Fed waits too late or moves too slowly, they could fuel a new asset bubble - ultimately crippling the U.S. economy once again. Because of these risks, investors are simply nervous.

An important distinction regarding financial markets is purely whether or not something makes logical sense. When it does, we remain fairly relaxed; when it doesn’t, we have some very long nights. Volatility in late market cycles is completely normal and something that we expect. While it sounds alarming, it is important to point out that late cycle economies often produce great market returns. Check out the chart below. As you can see, exiting the market early during a late market cycle can be a huge mistake. Regardless of how late cycle we are, you can see that on average, the final 24 months (up 41%), 12 months (up 23%), 6 months (up 15%) and 3 months (up 8%) can produce meaningful returns. 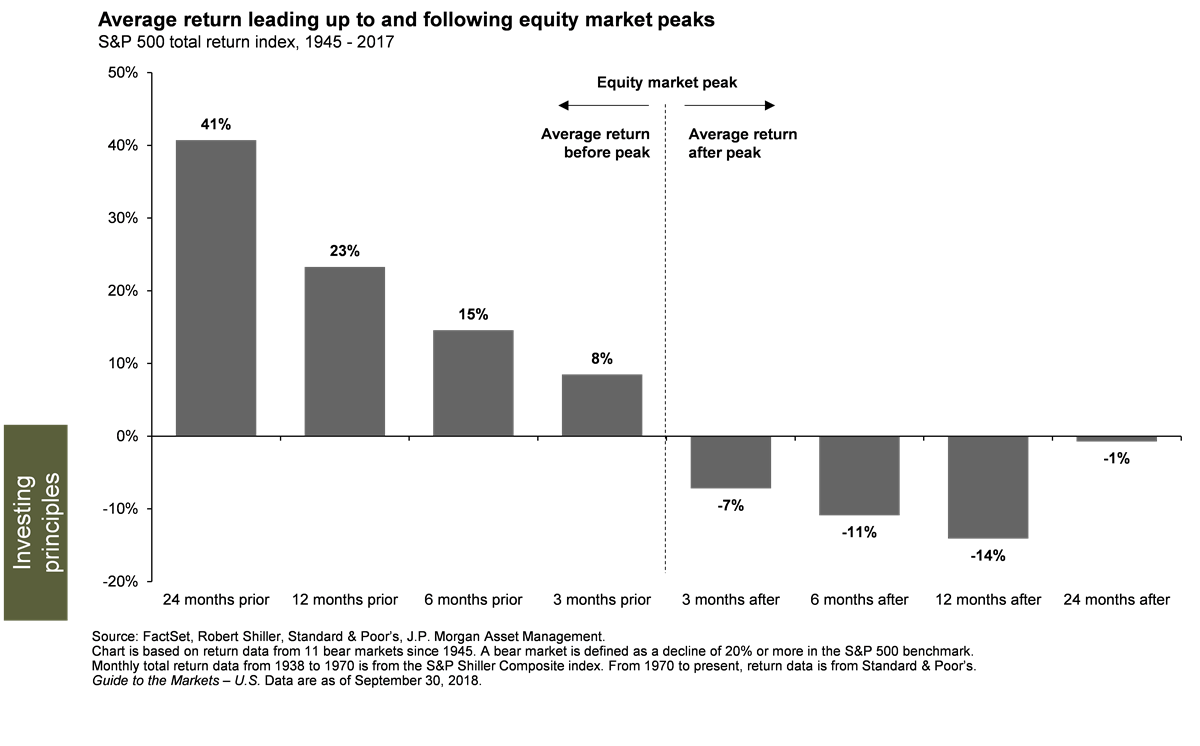 The real question is how late cycle are we? 7th inning, 8th inning, 9th inning or is the game already over? No one knows the answer to this question (hence the volatility). We would make the argument that we have some more room to run:

Unemployment currently stands at 3.68%: This is the lowest unemployment rate since the Vietnam War. We know that unemployment lags GDP, so with GDP still rolling at 3% year over year growth, it is safe to assume that unemployment is headed DOWN even further. Meaning that we have a while before productivity maxes out.

Corporate Earnings: Earnings are at 23% year-over-year growth. Although the Trump tax reform accounts for 9% this growth, 14% is still an extremely healthy number. We are expecting 10% year-over-year growth during 2019, meaning that Wall Street would have to be SIGNIFICANTLY wrong for us to see our first signs of an earnings recession. The anticipated growth figure for 2020 is only 4-5%, meaning that we are getting closer to no-man’s land.

Tax reform: I just mentioned that the tax reform has had a positive impact on 2018 corporate earnings. While this tail-wind goes away in 2019 from a year-over-year growth standpoint, don’t forget that companies are still making more money and they have to invest that money somewhere. This is another tailwind.

Global growth: European and Asian economies finally caught traction in 2016-2017. These economies are 3-5 years behind the U.S. in the economic cycle meaning that all U.S. businesses selling products overseas will benefit from this tailwind for several years.

Federal Reserve: The Fed is not crazy. In fact, if you have listened, they have basically told us exactly what they are going to do. They will continue to increase rates in the short term to prevent the next asset bubble (forget inflation; remember the commodity bubble, tech bubble, real estate bubble), but the moment they feel a slow-down, they will stop.

Trade war: The trade war actually is a big deal. Such a big deal that we think something has to be done. While U.S. business owners are starting to complain about margins being squeezed (wait until the tariff increases in January), China has already hit the panic button. The Chinese stock index is down 20% this year. Their government recently lowered the reserve requirements for banks in an effort to create a 190 billion inflow into the economy. We just don’t think either country will allow this to get much worse.
Remember, months like October are why we always recommend diversification and not acting on emotion. As always, we will continue to monitor. Thank you for your confidence.